This post was originally published on The GoodMen Project. 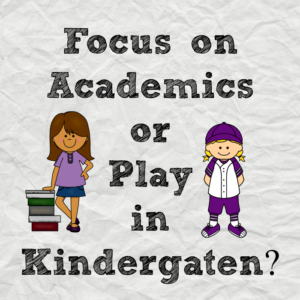 Since the 1980s, Kindergarten has become increasingly academic.  From President George W. Bush’s No Child Left Behind to President Barrack Obama’s Race to the Top, and since the establishment and push for a Common Curriculum, Kindergarten students are being asked to do more and more things academically.  Now a report from two early childhood education organizations, Defending the Early Years and Alliance for Childhood questions whether we should be emphasizing rigorous academic standards.  The report, titled: “Reading in Kindergarten: Little to Gain and Much to Lose.” According to their report, there is little scientific data to support that teaching a child to read in kindergarten, or even younger helps the child to become a better reader in the long run.

As their report states,
Now, as the Common Core standards take hold across the country, literacy has taken over even more space in kindergarten classrooms, crowding out many high quality learning experiences young children need. In a survey by Defending the Early Years (DEY) of about 200 early childhood teachers (preschool to grade three) across 38 states, 85% of the public school teachers reported that they are required to teach activities that are not developmentally appropriate for their students.9
A New York public school kindergarten teacher with more than 15 years of experience reported: Kindergarten students are being forced to write words, sentences, and paragraphs before having a grasp of oral language…We are assessing them WEEKLY on how many sight words, letter sounds, and letter names they can identify. And we’re assessing the “neediest
students’” reading every other day.10 While the timetable for children’s cognitive development has not changed significantly, society’s expectations of what children should achieve in kindergarten have. A recent two-year study by the Gesell Institute in New Haven found that “children are still reaching important developmental milestones in much the same time frame as they did when Dr. Arnold Gesell first published his data in 1925.”11

To report on the question of early reading, Sebastian Suggate summarized his own studies and those of others that shed light on the issue. Suggate is a professor of psychology from New Zealand who teaches at the Alanus University of Arts and Social Sciences in Bonn, Germany. In 2007 Suggate began to study childhood reading, which became the topic of his doctoral thesis. His studies raise serious doubts about the effectiveness of early reading instruction. In his doctoral thesis Suggate concludes that there is no solid evidence showing long-term gains for children who are taught to read in kindergarten.14 In fact, by
fourth grade and beyond, these children read at the same level as those who were taught to read in the first
grade. Suggate has continued to study the question of why children should learn to read at five when those
who learn at six or seven do just as well by age 11. He also considers what harm is done by focusing so much kindergarten time on reading instruction, leaving little time for other much-needed activities.15

So, the question is, why are we all rushing to get our children grown up and out of school?  It is like rushing a toddler to potty train when we all know that by the time he goes to college, he will be out of diapers.

A number of long-term studies point to greater gains for students in play-based programs as compared to their peers in academically-oriented preschools and kindergartens in which early reading instruction is generally a key component.
Findings from HighScope’s Preschool Curriculum Comparison Study, for example, suggest long-term harm, especially in the social-emotional realm, from overly directive preschool instruction. In this study, begun in the late 1960s, 68 children from low-income homes were randomly assigned to one of three preschool classes. Two were play-based and experiential.
The third was a scripted, direct-instruction approach. Interestingly, there were very similar short-term gains
among the children in all three programs at the end of year one. But the children were followed until age 23.
By that time, there were significant differences in social behavior.17 School records indicate that 47 percent of the children
assigned to the direct instruction classroom needed special education for social difficulties versus only 6 percent from the play-oriented preschool classrooms. And by age 23, police records showed a higher rate of arrests for felony offenses among those who were previously in the instructional program (34 percent) compared to those in the play-based programs (9 percent).

As the report implies, just because a child has all the reading readiness skills to be able to read academically,does not mean that the child is socially/emotionally ready to read and learn in Kindergarten.  When a child becomes frustrated and loses confidence in himself at such an early age,  consequences all throughout school and later in life can be significant.

All children develop differently and come from different backgrounds culturally and socio-economically.  Instead of forcing all five year old children to start kindergarten, or criticizing parents who decide to “red-shirt” (hold back) their child so that their student is more prepared, why don’t we take a step back and allow children more time to have fun in an educational setting. Can’t a kid just be a kid for a little while longer?